WHY CAN’T WE CELEBRATE VALENTINE ??? 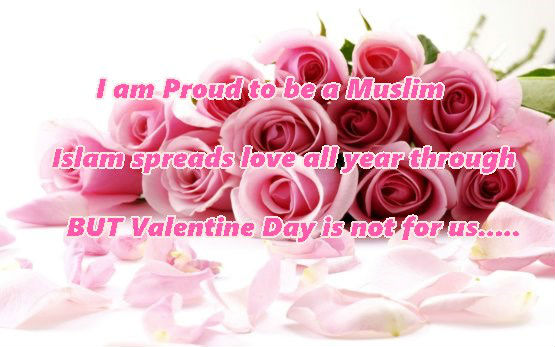 A question usually asked by our new generation. Truly speaking I also was celebrating Valentine day few years back , giving gifts to my mother and friends 🙁 when I read the background and origin of this day I felt sorry and asked Allah for forgiveness.

Islam is a religion of Peace and Love. Islam does recognize occasions which are cheerful and bring people closer to each other. Imitating the West (kuffar) blindly is forbidden in Islam whether that imitation is of their worship or of their customs and behavior.
Valentine Day is an innovation or Biddah that has no religious significance. Islam asks all Muslims to love and respect each other all over the year, reducing the whole year to one specific day is rejected. Why on 14h feb you need to show your love to your loved ones. You can give red roses and red velvet cakes every month to close relatives 🙂
We as a Muslim ought not to follow in the footsteps of such innovations and superstitions that are common in what is known as the Valentine’s Day. No doubt that there are many irreligious practices that occur on that day, and those practices are capable of dissuading people from the true meanings of love and altruism to the extent that the celebration is reduced to a moral decline.
Celebrating Valentine’s Day means resembling or imitating the pagan Romans, then the Christian People of the Book in their imitation of the Romans in something that was not a part of their religion. If it is not allowed to imitate the Christians in things that really are part of their religion – but not part of our religion – then how about things which they have innovated in their religion in imitation of idol-worshippers?! 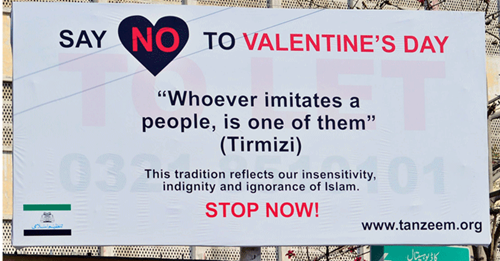 This is indicated by the Qur’an, Sunnah and ijmaa’ (scholarly consensus):

The story of the Festival of Love (Valentine’s Day)

The Festival of Love was one of the festivals of the pagan Romans, when paganism was the prevalent religion of the Romans more than seventeen centuries ago. In the pagan Roman concept, it was an expression of “spiritual love”. There were myths associated with this pagan festival of the Romans, which persisted with their Christian heirs. Among the most famous of these myths was the Roman belief that Romulus, the founder of Rome, was suckled one day by a she-wolf, which gave him strength and wisdom. The Romans used to celebrate this event in mid-February each year with a big festival. One of the rituals of this festival was the sacrifice of a dog and a goat. Two strong and muscular youths would daub the blood of the dog and goat onto their bodies, then they would wash the blood away with milk. After that there would be a great parade, with these two youths at its head, which would go about the streets. The two youths would have pieces of leather with which they would hit everyone who crossed their path. The Roman women would welcome these blows, because they believed that they could prevent or cure infertility.

The connection between Saint Valentine and this festival
Saint Valentine is a name which is given to two of the ancient “martyrs” of the Christian Church. It was said that there were two of them, or that there was only one, who died in Rome as the result of the persecution of the Gothic leader Claudius, c. 296 CE. In 350 CE, a church was built in Rome on the site of the place where he died, to perpetuate his memory. When the Romans embraced Christianity, they continued to celebrate the Feast of Love mentioned above, but they changed it from the pagan concept of “spiritual love” to another concept known as the “martyrs of love”, represented by Saint Valentine who had advocated love and peace, for which cause he was martyred, according to their claims. It was also called the Feast of Lovers, and Saint Valentine was considered to be the patron saint of lovers.

One of their false beliefs connected with this festival was that the names of girls who had reached marriageable age would be written on small rolls of paper and placed in a dish on a table. Then the young men who wanted to get married would be called, and each of them would pick a piece of paper. He would put himself at the service of the girl whose name he had drawn for one year, so that they could find out about one another. Then they would get married, or they would repeat the same process again on the day of the festival in the following year. The Christian clergy reacted against this tradition, which they considered to have a corrupting influence on the morals of young men and women. It was abolished in Italy, where it had been well-known, then it was revived in the eighteenth and nineteenth centuries, when in some western countries there appeared shops which sold small books called “Valentine’s books”, which contained love poems, from which the one who wanted to send a greeting to his sweetheart could choose. They also contained suggestions for writing love letters.

It was also said concerning the origins of this holiday that when the Romans became Christian, after Christianity had become widespread, the Roman emperor Claudius II decreed in the third century CE that soldiers should not get married, because marriage would distract them from the wars they used to fight. This decree was opposed by Saint Valentine, who started to perform marriages for the soldiers in secret. When the emperor found out about that, he threw him in jail and sentenced him to execution. In prison, he (Saint Valentine) fell in love with the jailer’s daughter, but this was a secret because according to Christian laws, priests and monks were forbidden to marry or fall in love. But he is still regarded highly by the Christians because of his steadfastness in adhering to Christianity when the emperor offered to pardon him if he forsook Christianity and worshipped the Roman gods; then he would be one of his closest confidantes and he would make him his son-in-law. But Valentine refused this offer and preferred Christianity, so he was executed on 14 February 270 CE, on the eve of February 15, the festival of Lupercalis. So this day was named for this saint. In The Story of Civilization, it says that the Church devised a calendar in which every day was designated as the feast day of one of the saints

NOW its your decision to celebrate Valentine day or not. To follow Islam or imitate West. 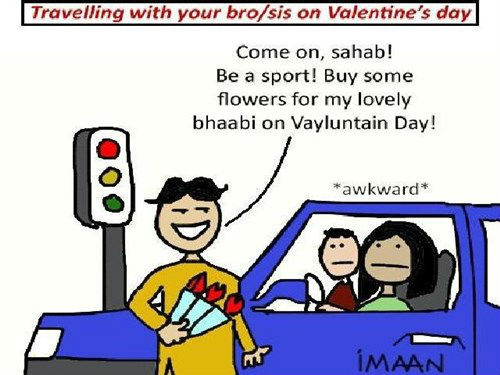